Review: Between Shades of Gray by Ruta Sepetys 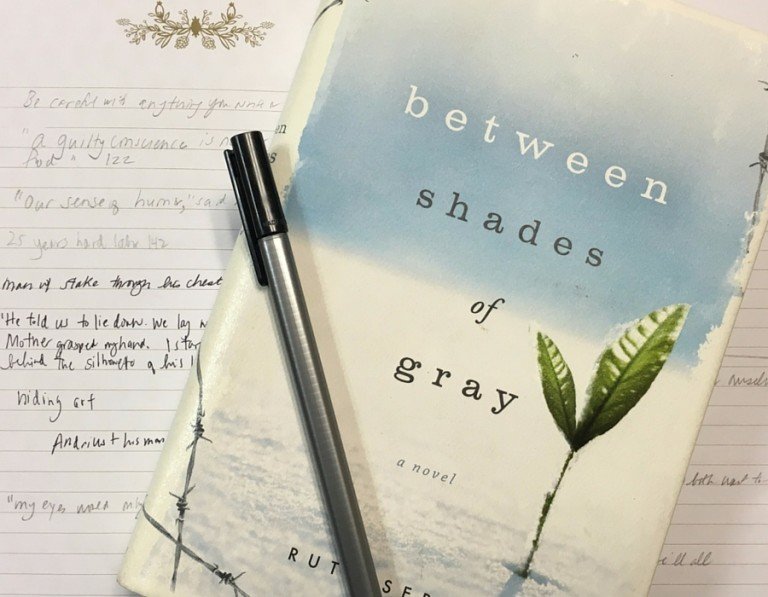 In the fall of 2011, an eighth-grade student of mine wrote a beautiful letter to Ruta Sepetys, the author of Between Shades of Gray, detailing what she’d gleaned from Sepetys’ first novel  – the power of perseverance, integrity, and love. Since then, the World War II chronicle has been on my list. Finally, after hearing of Sepetys’s recent book, Salt to the Sea, on the New York Times Book Review Podcast,  I pulled a copy of Gray from my classroom library’s shelf.

Here’s the story: 15 year-old Lina Vilkas, her mother, and her younger brother are arrested by Soviet police on June 14, 1941, in Kaunas, Lithuania.  Vilkas’ father, a progressive university professor, has already been taken.  There will be twelve years of withering labor and unspeakable horror in gulags and cattle cars before she’ll see Lithuania again. To survive, Lina codes secret messages in her artwork and desperately clings to her instincts for kindness and generosity.

Between Shades of Grey is undoubtedly an important work.  Sepetys speaks in interviews about unearthing “hidden histories.” She’s a careful and empathetic researcher. According to her Author’s Note, many of the characters and events in this first novel grew from stories told to her during two separate trips to Lithuania as part of her writing process. At the close of her Note, she implores readers to spread the story of the brave people of Lithuania, Latvia, and Estonia who suffered so much under Stalin.  “Please research it,” she says.  “Tell someone. These three tiny nations have taught us that love is the most powerful army.”

Indeed, Lina’s own story anchors in love.  She displays abiding loyalty to her mother and brother. She commits to the drawings and paintings she eeks out of pilfered paper and pencil stubs, and in the worst of times, out of ashes mixed with snow. And finally, she fuels a budding romance with Andrius, another deportee whose circumstances prompt Lina to redefine right and wrong.  While death presses in, Lina’s reserves of love sustain her.  At one of the darkest moments she says, “I fell into every hope and allowed myself to wish from the deepest part of my heart…[W]e were escaping into a stillness within ourselves. We found strength there.”

Between Shades of Gray is, in many ways, very good. Excellent, even. I really do wish I loved this book, not only because it’s impeccably researched and admirable in structure, but because it makes me feel a little bit shallow and nit-picky to not love it. In the end, though, I craved a more nuanced view of Lina’s interior life.  Everything seems so matter-of-fact, even panic and death.  Maybe this is by design? I also wanted more detailed descriptions of Lina’s artwork – her secret messages to her father and her lasting legacy.  I put this sophisticated YA read in a category with two other WWII books I wish I loved: The Book Thief by Markus Zusak and All the Light We Cannot See by Anthony Doerr.

I know, I know.  Probably you and everyone you know also loved those books.  I already feel bad about it.

You’ll like it if: You love historical fiction, particularly stories set during WWII.

Maybe not so much if: You look for writing on the more lyrical side.  This book has artful flashbacks and harrowing chronology, but not so much poetry.

Maybe you didn’t love this book because it is written for young adults? It certainly moved your student to act. Isn’t it great that there is an audience for every writer? I find it to be a small miracle that even though you didn’t love the book, you have fulfilled the writer’s hope with this review. And for the record, I did love All the Light We Cannot See.

Hi, M! I am so happy to further Sepetys’ mission for this book! I really do think it’s important. I love lots of children’s and YA books, so I don’t think it’s the intended audience that keeps me from falling in love with this one. When I was researching this review, I found that in some countries Between Shades of Gray was marketed to adults! I think I just don’t like historical fiction all that much… Many of my friends say that All the Light is among their top reads EVER! One of those has a birthday today, and I bought her both Between Shades of Gray and Sepetys new book about the sinking of the Wilhelm Gustloff.