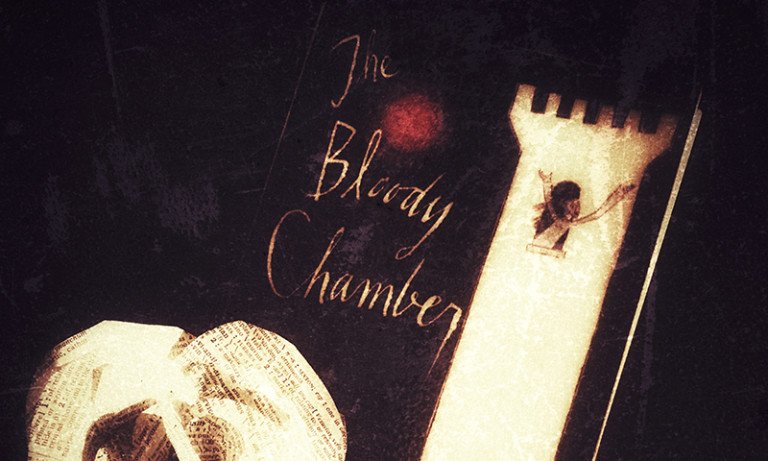 “There is a striking resemblance between the act of love and the ministrations of a torturer,” opined my husband’s favourite poet; I had learned something of the nature of that similarity on my marriage bed. And now my taper showed me the outlines of a rack. There was also a great wheel… And – just one glimpse of it before my little flame caved in and I was left in absolute darkness – a metal figure, hinged at the side, which I knew to be spiked on the inside and to have the name: the Iron Maiden.”

– The Heroine in “The Bloody Chamber” by Angela Carter

This gorgeous collection of short stories by Angela Carter, written in 1979, is a sumptuous, modern reconceptualization of a selection of famous fairy tales. Classics such as Jeanne-Marie Leprince de Beaumont’s “La Belle et la Bête” or Charle’s Perrault’s “Barbe Bleue,” are recalled and focus the reader’s attention to the themes of female sexuality, violence, and power. The book’s prose is elaborate and decadent, dually reflecting sensuality and horror, as monsters and wolves prey on heroines and as vampires feed on unsuspecting townsfolk.

In The Bloody Chamber, as in any book of fairy tales, the reader cannot interpret the text as literal. These tales are pure allegory, often focusing their themes on female sexuality in violent and bloody contexts. There is a case to be made that these fairy tales are approached from a feminist’s perspective. The focus in nearly every story is on the heroine and her relation to the external forces that work against her, and in every story, the erotic portions are all from the heroine’s point of view. However, Carter has not affirmed that this is a feminist reimagining. In explanation of her work, Carter stated in an interview, “I was taking the latent image—the latent content of those traditional stories and using that; and the latent content is violently sexual, and because I am a woman I read it that way.” As with any allegorical work of art, it is the task of the reader to take what they will from the text.

The Bloody Chamber, the story that is the entire collection’s namesake, was one of the most compelling and successful tales in the book, and as stated above, notably erotic and violent. It is based off of “Barbe Bleue (Bluebeard),” and it is a gothic masterpiece with engrossing descriptions of a luxurious castle settled in a wild landscape. The lovely, young heroine is taken there after she marries a tyrannical husband whom she does not love. The husband takes her virginity and then leaves her, citing his need to attend to business. She is left to her own devices and soon disobeys his orders to not look into a particular chamber in the mansion. As a result, she is nearly punished by decapitation. While the original Bluebeard was frightening and grotesque, the villain in The Bloody Chamber is an older, attractive, rich, and coercive reimagining. The story is engrossing all the way through and brings to mind the melodrama of 18th century gothic novels such as “The Mysteries of Udolpho.”

This book can be assessed and interpreted in a variety of different levels. To read this book is to delve into something deeper than pure plot. Not to mention, the text itself is pure beauty. This book is best read by candlelight with a glass of dark, red wine and a velvet throw around the reader’s shoulders. Enjoy.