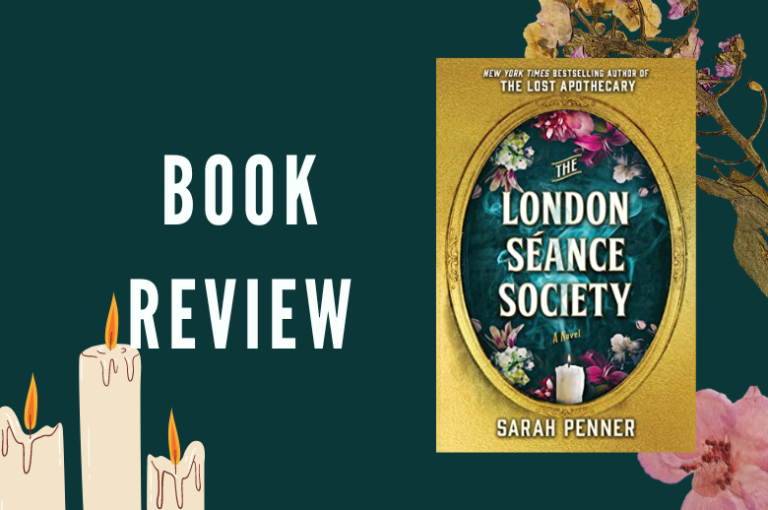 Hey, The Lost Apothecary fans! Looking forward to Penner’s new book, The London Séance Society? So was I! Read on to find out why I didn’t love it as much as her first.

1873: At an abandoned château on the outskirts of Paris, a dark séance is about to take place, led by acclaimed spiritualist Vaudeline D’Allaire. Known worldwide for her talent in conjuring the spirits of murder victims to ascertain the identities of the people who killed them, she is highly sought after by widows and investigators alike.

Lenna Wickes has come to Paris to find answers about her sister’s death, but to do so, she must embrace the unknown and overcome her own logic-driven bias against the occult. When Vaudeline is beckoned to England to solve a high-profile murder, Lenna accompanies her as an understudy. But as the women team up with the powerful men of London’s exclusive Séance Society to solve the mystery, they begin to suspect that they are not merely out to solve a crime, but perhaps entangled in one themselves…

The London Séance Society started out in such an interesting way: with a séance! It really pulls you in and gets you excited for everything that’s about to follow.

There are some real positives about this book. When you read through reviews, you’ll see a lot of comments about the dark, gothic vibes, which I’ll agree was really the star of the book. It really pulls you right into the whole séance scene and makes you feel like you could be sitting around the table with them. Very cool stuff.

Another thing I loved about this book is Vaudeline. She’s just awesome – a stand-out woman when it was incredibly hard to be such a thing. She knows what she wants, and she’s not afraid to go for it. Not to mention, she’s in touch with the spirit world 👻. In my opinion, she stole the show, and the female narrator, Lenna, was just okay.

The last thing I’ll touch on (no spoilers, don’t worry!) is the ending of the book. Things got pretty intense at the end with a very dark, very high-stakes séance. The whole book really is leading up to this one big thing (it’s talked about through a lot of the story), and the big thing didn’t disappoint for me. It actually gave the book back half a star!

Now, the parts I didn’t love so much…the pacing. Somehow I was bored at times, and just wanted to get to the juicy stuff. It seems like that’s what the author was trying for, as there’s some sort of “dun dun dunnnn” reveal/revelation at the end of just about every chapter for a good stretch. That kind of pacing made it a little cliché for me.

There’s also one point near the end of the story where you find yourself yelling at a main character, “What the heck are you doing?? Don’t you think maybe you should get the heck out of there?!?” There was just this whole plan put together, and then the character arrives where she’s supposed to get something and leave and she just….sits there. It didn’t make sense to me and made me want to throw the book down. Come on, character, get your act together.

So, overall there were some pain points for me, but the ending redeemed the book a little. I have no doubt The London Séance Society will have many fans and delight readers everywhere, but for me it was 3.5 stars.