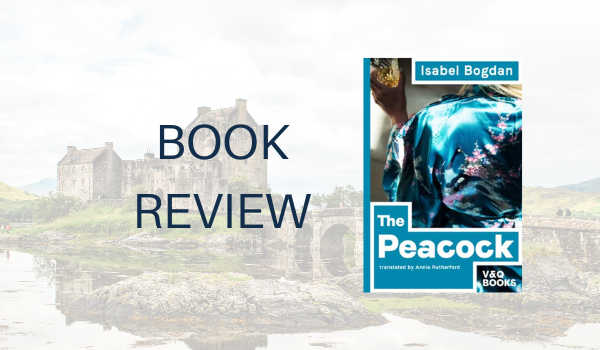 Take a dilapidated castle in the Scottish Highlands, add a peacock gone rogue, a group of bankers on a team building trip, an overwhelmed psychologist, a housekeeper with a broken arm, and an ingenious cook, get Lord and Lady Macbeth to try and keep it all together, and top it off with all sorts of animals – soon no one will know exactly what’s going on.

“Einer der Pfauen war verrückt geworden.” – “One of the peacocks had gone mad.”

This book had me hooked from the very first line! And had me cackling the entire way through.

Isabel Bogdan has created a wonderfully British comedy of errors as a team building weekend in the Scottish Highlands goes awry for a group of no-nonsense city executives.

I adored this story! Bogdan has clearly done her homework with her characters. She’s captured the British “stiff upper lip” perfectly; from Lord and Lady McIntosh playing it cool when it comes to their rogue peacock to the grumpy group of bankers who would rather be anywhere else on the planet than on a team building weekend.

This group of coworkers couldn’t have less in common. But in true British fashion, they soldier on and tip-toe around one another politely while trying to complete a series of tasks in the woods in four feet of snow. The story gives us the chance to hear each of the group’s thoughts, so we get to hear exactly what they think of one another. The sarcastic internal responses and retorts are extremely relatable for anyone who’s dealt with dreary colleagues.

These crazy characters have been brought to life in English by Annie Rutherford. I loved the translation! Rutherford notes that she wanted “the English reader to sink into the story as seamlessly as I had in the German”. And she’s done exactly that.

I read the English and the German version of The Peacock (Der Pfau in German) and thoroughly enjoyed both. Rutherford has maintained the humour of Bogdan’s story in her translation. I think she’s also added a slight British touch, barely noticeable, which enhances each of the characters.

You really feel the British sense of humour throughout the story. Sly, sarcastic comments from the group of bankers, the absurdity of a rogue peacock and the frustration of having to complete random team building activities in the snow really appealed to my sense of humour.

The Peacock has been a hit among German booksellers. And I totally get why. It gives the reader a glimpse into everyday British life and culture. As the reader, you have a front row seat to what is potentially the WORST team building weekend away EVER!

The Peacock
Isabel Bogdan, translated by Annie Rutherford
V&Q Books
book reviewfictionI would recommend this book to others
Share 0 FacebookTwitterPinterestEmail