Review: The Half-Life of Ruby Fielding by Lydia Kang 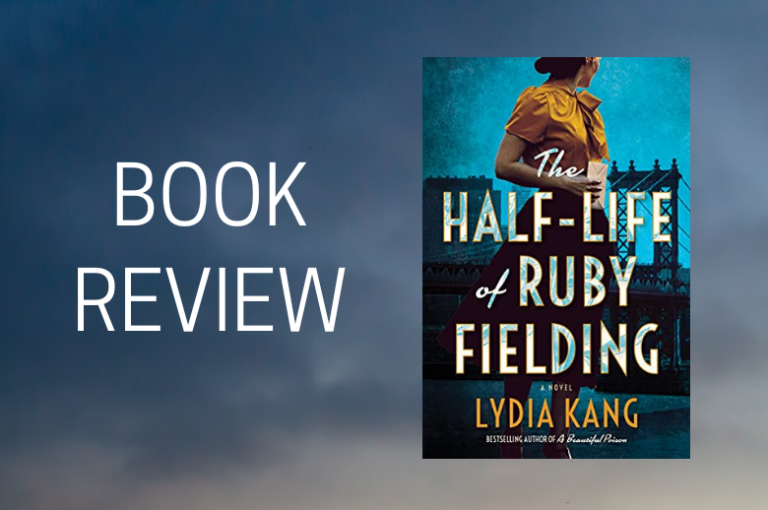 What an interesting book this was. I have to say, I wasn’t fully prepared for what it ended up being, but I was definitely entertained! Read on for the uniqueness of this book.

Brooklyn, 1942. War rages overseas as brother and sister Will and Maggie Scripps contribute to the war effort stateside. Ambitious Will secretly scouts for the Manhattan Project while grief-stricken Maggie works at the Navy Yard, writing letters to her dead mother between shifts.

But the siblings’ quiet lives change when they discover a beautiful woman hiding under their back stairs. This stranger harbors an obsession with poisons, an affection for fine things, and a singular talent for killing small creatures. As she draws Will and Maggie deeper into her mysterious past, they both begin to suspect she’s quite dangerous―all while falling helplessly under her spell.

With whispers of spies in dark corners and the world’s first atomic bomb in the works, the visitor’s sudden presence in Maggie’s and Will’s lives raises questions about who she is and what she wants. Is this mysterious woman someone they can trust―or a threat to everything they hold dear?

The Half-Life of Ruby Fielding by Lydia Kang is a book unlike most others I’ve read, because it’s sort of a historical suspense. I really wasn’t prepared for it! But once I was in the middle, I definitely had to keep reading to find out what was going to happen.

This book did start off a little slowly for me. The mysterious woman is found under the stairs, and then it just kind of stalls while the story and characters are set up. It was good during that time, but a little bit slow.

I did enjoy the mystery elements of the first half, while Will and Maggie are trying to figure out who their mysterious guest is. That whole storyline kept me engaged, even though the story slowed down. I was definitely wondering when it was going to pick up, though, and a little over half way through, I found my answer.

Things get nuts a little over halfway. I was a little taken aback at the sudden shift in the story, and the big shift in the characters. I felt like I had gotten to know them, and suddenly they were different people. I understand why it was written that way, but it just caught me off guard and I couldn’t figure out why they were doing what they were doing.

I also had a hard time with the relationships in this book. I couldn’t understand why (somewhat of a spoiler alert) a brother and sister would both continue having an intimate relationship with their mysterious guest when they knew what was going on with the other sibling and the same woman. Yeah, that was weird. Also, Maggie’s relationship with the stranger’s husband was super odd, and I could just not figure out why they would be seeing each other.

Overall, The Half-Life of Ruby Fielding was entertaining. If you like both historical fiction and mystery/suspense, this one might be up your alley. I gave it 3 stars.