Review: Hope, A History of the Future by G. G. Kellner 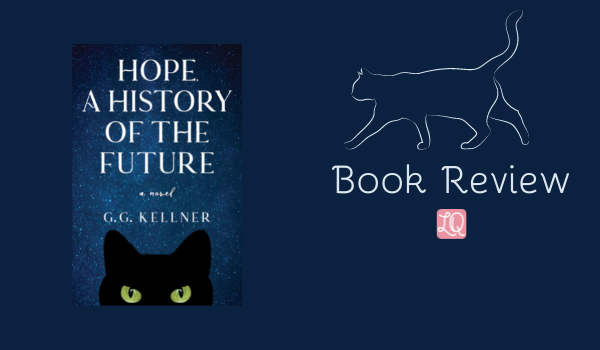 This is an interesting book that looks at the very real possibility of what the world might look like in 200 years. It makes a subject, that I often feel is treated as abstract, the focus; giving it a very real feel.

One quiet afternoon in 2037, Joyce Denzell hears a thud in her family’s home library and finds a book lying in the middle of the room, seemingly waiting for her – a book whose copyright page says it was published in the year 2200. Over the next twenty-four hours, each of the Denzell family members discovers and reads from this mystical history book from the future,
nudged along by their cat, Plato.

As the various family members take turns reading, they gradually uncover the story of Gabe, Mia, and Ruth – a saga of adventure, endurance, romance, mystery, and hope that touches them all deeply. Along the way, the Denzelles all begin to believe that this book that has seemingly fallen out of time and space and into their midst might actually be from the future – and that it might have something vitally important to teach them.

Engaging, playful, and thought-provoking, Hope is a seven-generation-spanning vision of the future as it could be – based on scientific projections, as well as historical and legal precedence – that will leave readers grappling with questions of destiny, responsibility, and the possibility for hope in a future world.

I enjoyed Hope, A History of the Future. But found it rather alarming at the same time.

G. G. Kellner’s writing is easy to read and the format (each of the Denzell family members reading a bit of the book) creates a sense of “What’s going to happen next?”. The short interludes we read in between the stories from the future give you a nice insight into the Denzell family, who could be any family in any country.

They’re relatable in that they’re aware of the problems society is causing in terms of climate change. But they’re not sure what to do about it. Discovering these accounts of the future, of a world that’s been devastated by climate change and had to completely start again, reinforces what they already know. Time is running out and something needs to be done.

The moving back and forth between the present day and the future almost gave the story a bit of a thriller vibe. You’re trying to fill in the blanks as you go through the story. You’re trying to make the connections between each of the characters you meet as you meet them.

“Maybe,” Kate ventured softly, looking at Zen and Grace, “it’s that the future is up to us to determine.”

Hope, A History of the Future by G. G. Kellner

Their story was one of daring adventure. The right amount of hope, silliness and sadness. It’s told from Little Bird’s perspective as she comes to the end of her life. So we see the world through the eyes of a small child who miraculously survived the end of the world. She’s a highly intelligent and observant person who’s forced to act far beyond her years when she loses her first family. I liked seeing the world from a child’s perspective as I think it stopped the story from becoming too dark or depressing. Little Bird managed to hold on to her innocence and child-like enjoyment of the world throughout the story.

Mia, Gabe and Ruth’s story, on the other hand, gave you a glimpse at the reality of surviving in a world that’s on the brink of extinction. The sacrifices that have to be made and the losses that are experienced, all done in the hope that they’ll find a better place to live once the worst of it is over.

The main topic of the story is what might happen to the planet in the face of climate change and global warming. It could be quite a depressing story, but Kellner has interspersed it with lightness, some funny moments, and cats. I’m sure we all worry about the planet’s fate sometimes, but Kellner has given us a version of reality that gives us hope.

Gayle G. Kellner lives on an island in the Salish Sea in a home that has been in her family for over 100 years. She is a writer, artist, poet, and former educator. Gayle is a weekly guest on the community radio program The Brown Briefly, a humorous look at politics and culture. When she isn’t writing, reading, or painting you can probably find her wandering the beaches and forests of her island home with her dog, Pippi, or swimming in her beloved Salish Sea. Gayle is allergic to cats.

Thank you to the author, G. G. Kellner, Grace and Tabitha at SparkPointStudio for sending me a copy to review.