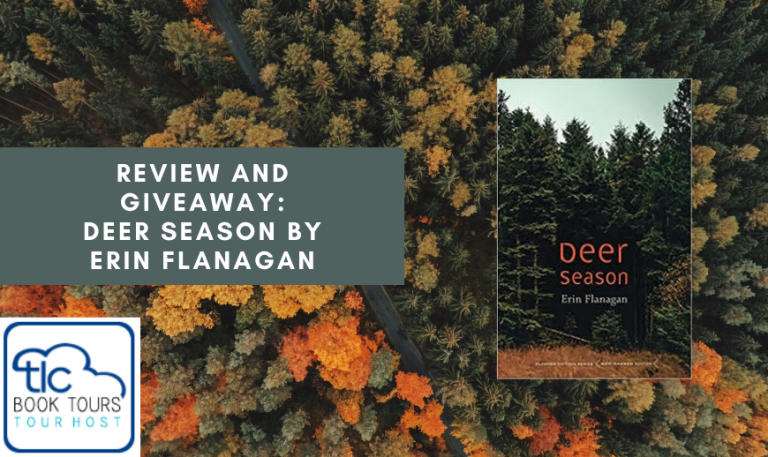 Thanks to TLC Book Tours for the opportunity to review Deer Season, Erin Flanagan’s newest work in her Flyover Fiction series. Read on to hear about why I loved this literary thriller/mystery and how you can win a copy!

It’s the opening weekend of deer season in Gunthrum, Nebraska, in 1985, and Alma Costagan’s intellectually disabled farmhand, Hal Bullard, has gone hunting with some of the locals, leaving her in a huff. That same weekend, a teenage girl goes missing, and Hal returns with a flimsy story about the blood in his truck and a dent near the headlight. When the situation escalates from that of a missing girl to something more sinister, Alma and her husband are forced to confront what Hal might be capable of, as rumors fly and townspeople see Hal’s violent past in a new light.

A drama about the complicated relationships connecting the residents of a small-town farming community, Deer Season explores troubling questions about how far people will go to safeguard the ones they love and what it means to be a family. (University of Nebraska Press, 2021).

On the surface, Deer Season might seem to just be the story of a missing girl, with the classic thriller elements of the bloody vehicle, and the secrets kept by the book’s characters. But the genius of Flanagan’s writing is that Deer Season is about so much more than just a missing girl, it’s about the relationships between the town’s characters, and about how their individual losses have shaped them into the people they are today.

As with the other works in her Flyover Fiction set, Flanagan never gives in to the stereotypes or overwrought sympathy that can sometimes plague the small-town novel. Instead, her characters are sharply drawn and she allows the reader to get to know each of them slowly, drawing out the complex motivations and connections each member of the story might have had to Peggy’s disappearance.

As anyone who lives in a small town knows, there is no such thing as an event that can be kept quiet, and Deer Season does a beautiful job showing how one event, Peggy going missing, is really just the catalyst for years of strain and tension that’s been bubbling amongst the townspeople to start boiling over.

Throughout the book, Flanagan returns again and again to themes of family, home, and what we do when we find ourselves in situations that challenge our most closely held beliefs.

For me, one of the best parts of this novel was watching Alma reckon with how her life had diverged from her original plans, and what emotions she had buried in order to keep herself on course. Additionally, through the lenses of Hal and Milo, we get to see what it’s like to be an outsider in such a close-knit environment and the impact that has on a person.

Overall, Deer Season is rural fiction at its best, and I look forward to diving into more of Flanagan’s work soon.

To win a copy of Deer Season for yourself, leave a comment on this post. One winner will be randomly selected. Giveaway closes Wednesday, September 22 at noon CST. U.S. residents only please.

Monday, August 23rd: Diary of a Stay at Home Mom