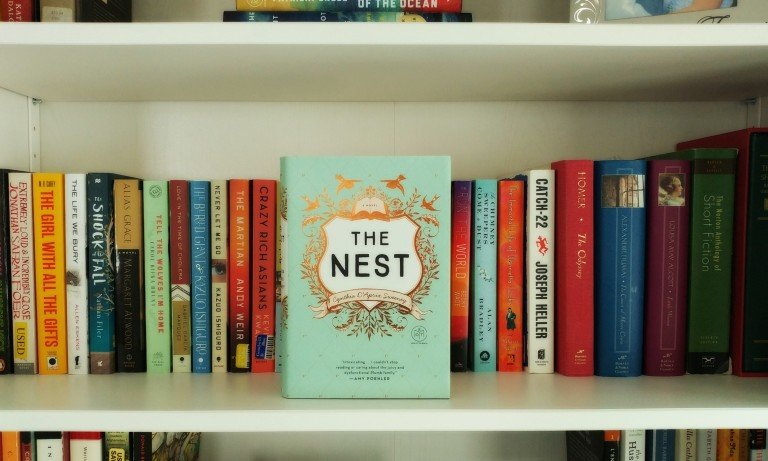 I have to admit, I’m sometimes kind of a hyped book snob, in that I tend to avoid them. Hyped books are so hit or miss – sometimes, they deserve all the attention, whereas other times, I just can’t understand the hype at all. This one, for me, falls somewhere in between those two extremes. I’m going to have to spoil alert this post, because my only disappointment with this book was the ending. Don’t worry, I’ll warn you 😉

The Nest is a story about a dysfunctional family of 4 adult children and their aging mother. They’ve been promised a piece of their late father’s invested money, aka “the nest”. However, they can only get it when the youngest sibling, Melody, turns 40. Those are the rules. When eldest son Leo gets into a drug-fueled car accident that needs to be covered up to avoid a public stain on the family name, mom digs into the nest for the money. Bye-bye to all that money they needed so badly!

So, in a nutshell, The Nest becomes a story about the struggle to maintain life with dwindling funds. Supporting families, running businesses, and keeping up lifestyles is no longer guaranteed without that money. Each of the siblings had different plans for that money, and now they’ve got to adapt.

Some people found this story to be a bunch of used-to-be-rich kids crying and whining over their lost money. While I definitely understand where that comes from, I did like and identify with several of the characters. I thought there was a lot of great character development going on here, and that made this story into a colorful one for me. Each characters’ story is different and interesting, and I was drawn in pretty quickly to their fight to keep a sense of normalcy in life.

OK, if you haven’t read The Nest and you plan on doing so, you may want to stop reading here, because I’m about to talk about the ending. You have been warned!!

I did not like the ending at all! The reason I enjoyed entire story up until the ending was because of the adversity faced by each character, and the ending ties all of them up in a neat little bow. Every character has some sort of epiphany or “everything is going be totally fine and life is great!” kind of moment, and I thought that was kinda silly. It felt like the author just wanted to slap an “and they lived happily ever after” on there and move on with her next book. I just had a hard time connecting with this ending at all.

I want to know…did you read The Nest? What did you think of the ending? Did you hate all the characters for being whiny bitches?

Thanks so much to Book of the Month Club for sending me The Nest in exchange for a fair and unbiased review of their service.

I have to say, I did not like The Nest at all. Not really even one little bit. In fact, I could not really understand what all of the hype was about. Although I agree that the character development was good, there wasn’t a character in the entire bunch that I actually liked, and that made it difficult to get through. I also thought it odd that the victim of the car accident would pop up here and there in the book but not really be fully developed into the story. I agree with you on the ending – it all worked out a little too nicely (although not in the ways that the characters perhaps would have liked).

Hm now that you mention it, she was just sort of thrown in there. I actually got confused a couple times about who the story was talking about when it opened with her and her man friend. I couldn’t keep track of everyone!