Review: At the Edge of the Orchard 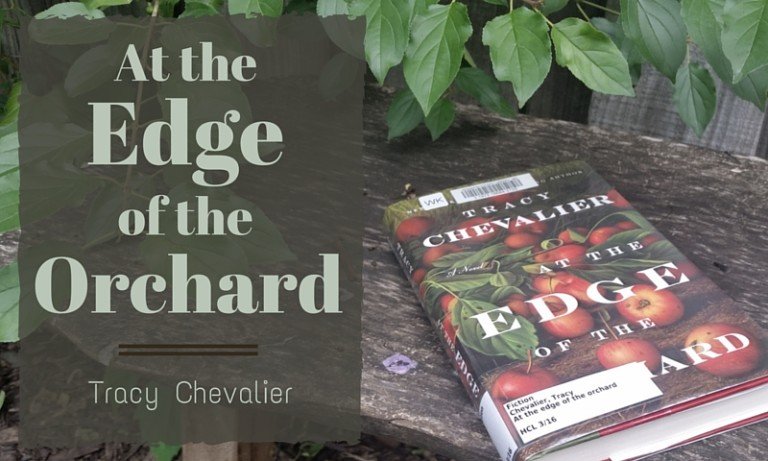 For some reason, I’m really attracted to novels from this same time period – a time of western expansion, when life was constant work on the American frontier. Work to keep a house, to make a living, to grow and slaughter your own food. It’s just so different from how we live today (at least, a lot of us). These stories always have such romance to them; romance for nature, growth, hard work and suffering.

It’s for this reason, coupled with Chevalier’s unique way of crafting a story, that I really enjoyed this book. In fact, I gobbled it up, page by heart-wrenching, romantic page. Although the main narrator of the book was tough for me to connect with (a life-hardened young man), she expertly pulled me into his head, and I understood him. I could feel how conflicted he was throughout, and how affected he was by his scandalous, difficult and traumatic childhood.

I’m getting ahead of myself. Let me tell you a little more about the story! We begin on a farm in the Black Swamp in Ohio. The Goodenoughs have just moved there, and they’re experiencing all the hardships people of those times did: death from illness, keeping food on the table, growing crops, and staying sane. The Goodenough family keeps a garden, some corn, and their father James’s pride and joy, a growing grove of apple trees. James is almost obsessed with growing his trees. He finds solace there with them, as his wife is, for lack of a better way of saying it, going completely nuts, and he doesn’t feel very connected to his children. His youngest son Robert, though, follows him around and has almost a haunting affect on James.

Without giving too much away, I’m just going to tell you that tragedy strikes and alters the course of Robert’s life. The rest of the book follows Robert as he journeys West, making a different sort of life for himself than what he had at the family farm.

Although Robert begins with mining gold, trees lure him back to them. The huge redwoods and sequoias of California astound him, and he’s drawn to them, just as with the apple trees in his childhood.

I can’t tell you a whole lot more without giving away too much, but I will tell you that this story of family, of hardships, friendships, and a little romance in the American West will stick with me for a while. I’ll admit, I was really skeptical at first – at the beginning of the novel, the story is narrated by the dad, James, and mom, Sadie, and you’re in Sadie’s head as her decent into drink and hating the swamp turns into these crazed actions and thoughts. Plus, she talks like this:

Sal had always been a tattler. I knew she was lookin out for me more than any other Goodenough did, but that didnt make me like her more. Shed come to me and say, Ma,. Marthas wet the bed, Ma, Nathan at all the bacon, Ma, Rober let the fire go out. She wanted everything to be fair, when the best lesson she could learn was that life aint fair and theres no point expectin it to be.

Although Sadie’s sections weren’t my cup of tea, I’ll admit, they really added to the overall feel of the book. I was totally immersed in this pioneer world that Chevalier created, and I wouldn’t have it any other way.

This book is so close to being 5 stars for me, that I can’t settle with 4. I’ll give it 4 1/2. Thanks to a recommendation from a friend, I’ve added Chevalier’s Remarkable Creatures to my TBR list. If you enjoy stories of the romantic American West as much as I do, put this one on your list.

fictionfrontierI would recommend this book to others
Share 0 FacebookTwitterPinterestEmail