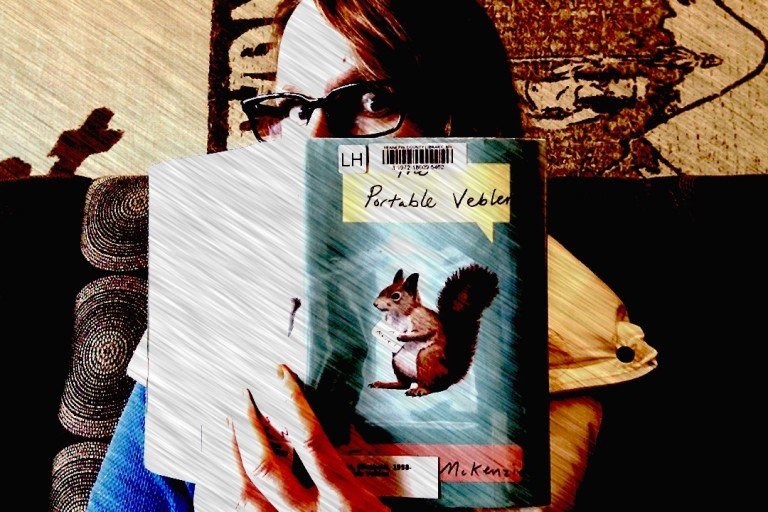 This novel can be described with the following list of very interesting adjectives: quirky, ironic, karmic, squirrelly, political, joyful, maddening, hilarious, emotional, awkward, and even Pynchonesque at times.

Is your interest piqued? It should be!

I had a good time reading The Portable Veblen. It’s bursting with themes that exercised the English major muscles in my brain! There are so many dysfunctional relationships, a hilarious and thought-provoking commentary on marketing and big business and corruption, and an exploration of mental health, all told by a confused but quirky and hilarious narrator named Veblen, who has a love for the environment and a penchant for talking to her squirrel friend.

Let me try to put this story into a nutshell for you (pun intended). Veblen is a 30-ish woman with a love for typing, squirrels, fixing up her cottage, and translating Norwegian. The story begins with a marriage proposal from her boyfriend, Paul. Her thoughts and reaction to the proposal tips you off to the fact that this will not be an ordinary book about an ordinary love story. Especially when there’s a squirrel involved.

Her body quickened, like a tree in the wind. Later, she would remember a filament that passed through her, of being glad she had provided him happiness, but not really sure how she felt herself.

The squirrel emitted a screech.

She managed to say it. Yes. Two human forms became as one, as they advanced to the sidewalk, the route to the cottage on Tasso Street.

Behind them, the squirrel made a few sharp sounds, as if to say he had significant doubts. As if to say, and she couldn’t help translating it this way: There is a terrible alchemy coming.

Thus begins the complicated story of the coming together of two dysfunctional families. Both sides affected by mental illness, complicated human natures, strong personalities and government skepticism, the scenes where these families meet are fraught with powder keg moments. Veblen and Paul’s relationship is rocked by their reactions to each others’ family’s issues, as well as their own. Paul’s mentally ill brother Justin and Veblen’s hypochondriac mom Melanie are two of the most antagonistic characters in the story.

Paul is going through a patent process for his medical device, a skull-punch tool meant for use in war zones as an immediate way to remove pressure from inside the skull to treat brain injuries. This gives the novel ample space to explore (and make me giggle about) mass marketing and the corruption of large companies and the government. If you’ve ever had the pleasure of reading Thomas Pynchon, these parts of the story will give you the kinds of feelings Pynchon does. They’re hilarious and full of truths that’ll make you laugh because you know they’re true, as well as completely absurd.

There were times in this book that I wished Paul and Veblen would just split up, because I didn’t like Paul. But then I liked Paul, and thought Veblen was being an idiot. And then they were both idiots. And then I liked them both! It was a roller coaster. Looking back, I loved every minute of it. There’s an especially hilarious scene where Veblen is in a hotel room with the squirrel in a cage (long story), and she begins talking to it. She also butt dials Paul, and he hears her talking, and thinks she’s cheating on him with another man! Paul loses. his. mind. Hilarity ensues.

I could go on and on with all the scenes in this book that I enjoyed or felt something about, but I feel like this review is starting to get a little long. So…

The Portable Veblen was a wonderful read. I giggled, I raged, I rolled my eyes, I went “whaaaaaaat”, and I felt for these characters. McKenzie is really very good at character development. I loved them at times, I wanted to smack them at times, dump them at times, and hug them at times. If you’re a literary fiction reader with a penchant for finding themes, you’ll love this book. If you love Pynchon, you’ll draw parallels between his absurd moments and McKenzie’s. If you love a crazy story of messed-up relationships, you’ll love McKenzie’s characters. In short: read this book, because it’s really good!

This review is FANTASTIC. I hadn’t even heard of this book – but I do want to read it now! Also, your writing! Oh my goodness – it’s impeccable.

😀 Thank yooouu! Definitely an interesting read – not like anything else I’ve read in a while! Gave me flashbacks to English lit classes in college…I think a lit class would have a field day with this one.

Loved your review! I thought this book would be too weird to read, but you make it sound more quirky and fun. I think I’ll give it a shot.

Thanks Meg! It definitely hugs that line of “too weird”, but ended up having just the right amount to not overdo it. Now if the squirrel started talking to Veblen in English, I would have been a little put off. But nope, just stayed perfectly in the quirky zone :]