Review: The Grownup by Gillian Flynn 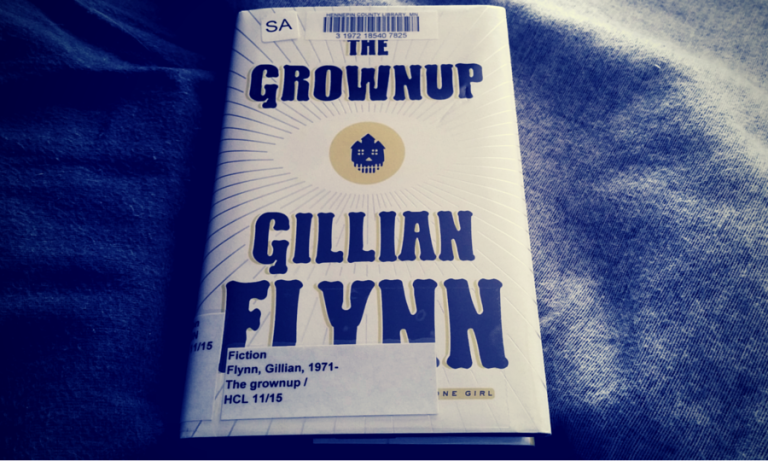 Wow. What a whirlwind this tiny little book is!

This is the first I’ve read of Gillian Flynn’s works. Yes, I know, everyone who’s anyone talks about how good they are. But creepy is just not my thing! So I avoid them. Until, that is, this short little read popped up as the March read for the book club I’m in. Ok, ok, fine, I’ll give in to the hype and I’ll do it, I’ll read Flynn.

I pick the book up from the library and am rather astonished at its tiny size – at 63 pages, it looks like it should be a kid’s book.

But then I opened it…

Say whaaaat? What am I in for? That’s what I was thinking when I read those interesting first couple lines of the book. As I kept going, though, I began to see what all the hype is about over Flynn.

I LOVED this book! It was so snarky and witty and hilarious. Then it became creepy. Then it toyed with my brain in a “wait…what?” kind of way. Yet throughout the whole thing, that snark that the main character has is perfection. I don’t usually like being creeped out at all, but somehow I LIKED being creeped out by this book. It was captivating! Here’s one of my favorite creepy parts:

Miles’s door slams at strange times. And he…he’s getting worse. It’s like something has settled on him. A darkness he carries on his back. Like an insect shell. He scuttles. Like a beetle.

Yeesh! But then there’s this little gem:

Books may be temporary. Dicks are forever.

I’m sad that this book took me less than an hour to read – I wanted more.

It was a fun read. I still have some qualms and a lot of questions about the last 1/16th of the book, but it definitely entertained me. And you were right, I have to admit that I do kinda talk like the main character (in reference to a previous conversation me and Joli had about this book).

[…] For another LQ review of Gillian Flynn’s work, check out Joli’s post here about The Grownup. […]

This sounds great! I love snarky! Plus sometimes it’s good to read a concise, well-written book. Thanks for the review!

[…] Grownup by Gillian Flynn – Joli and I read this for our book club earlier this year, and we both really enjoyed it. This isn’t Flynn’s […]