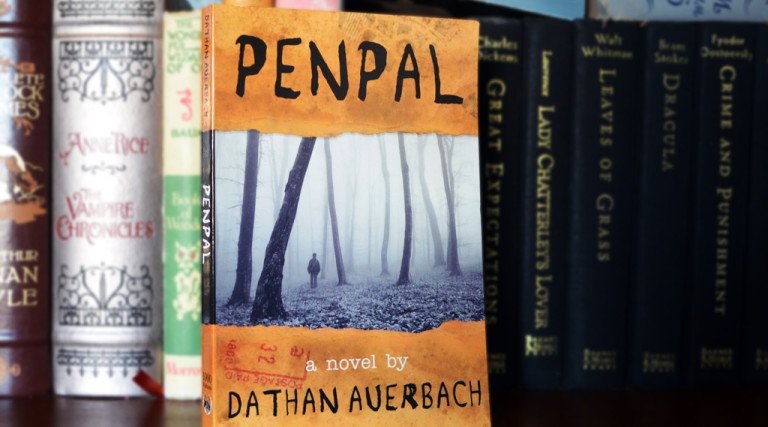 For those that don’t internet horror much:
Creepypasta: Internet horror stories and accompanying imagery and art that are shared, often copy and pasted over and over, on websites and forums.
r/nosleep: A subpage on the website Reddit featuring original works of horror fiction by online users.

I want to start this review by first mentioning that I have full respect for writers who self-publish, and even more respect for a writer like Dathan Auerbach who expanded a story that was first posted on the Internet into a fully formed novel. That takes confidence and perseverance, and Auerbach has created a strong following of readers that attests to Penpal’s ability to entertain horror fans.

I love a good scary story. As a child, I would read horror stories even when I knew the habit would result in nightmares and fed into my already anxious personality. I loved, and still love, the adrenaline rush that accompanies reading a tale of horror. And now as an adult, I have the entire Internet at my disposal. New works of horror are just a click away. Voracious readers of the genre never have to worry about running out of material when creepypastas are plentiful. I am no stranger to the subreddit r/nosleep, where the writings of Auerbach’s novel first appeared, and I have spent hours indulging in its creepy tales.

With all that being said, you would think I’d love this book, right? Well, not exactly.

Unfortunately, this book fails, for the reasons that online creepypastas succeed. It’s vague, stylistically bland, and the language and characterization is shallow. Bad writing works for short online works of horror. The reader doesn’t expect literary greatness on a casual online forum; they want a pithy tale that will creep them out. Sure, maybe that online horror post had bland characters and a few plot-holes, but it scared you, right?

Yet suddenly, when one moves the writing’s platform from a subreddit to a novel, either paper or digital, the reader’s expectations are understandably raised. And here lies the problem with Auerbach’s Penpal.

It’s frustrating, especially to a horror-junkie, to see the potential in a horror novel and witness it fall flat due to bad writing. The premise of the story is scary. If given greater care with editing, I could see it being successful. But, it’s just so badly written.

I bought this book online after seeing it on a list of must-read horror novels. I prefer not to read too much about a book before I dive into it myself, so I didn’t know its origin story. I wasn’t expecting a classic, just something entertaining. It was while reading the book that I stopped midway through and thought, “I feel like I’m reading something on r/nosleep.” I then looked Penpal up online, and whatdaya know, that’s exactly where this book started out.

Dialogue and characterization are rough in this book. It seems the author hasn’t had many interactions with children, because in this novel, the child characters’ development and language skills are on par with the adults. The book skips between the narrator’s experiences as a six-year-old, to a teenager, to an adult, and it is terribly confusing to tell how old the narrator is based on internal and external dialogue. I had to flip through each chapter to find some concrete evidence of how old each character was. Is this a six-year-old or a teenager speaking? I really couldn’t tell.

There were also moments during this novel that I experienced reading déjà vu. Sentence structure and word usage were repetitive. I would read a descriptive sentence on one page and encounter a very-near version of it several pages after. I’m not asking for Flaubert-level obsessiveness over sentence structure and word usage, but some variety staves off the reader’s boredom.