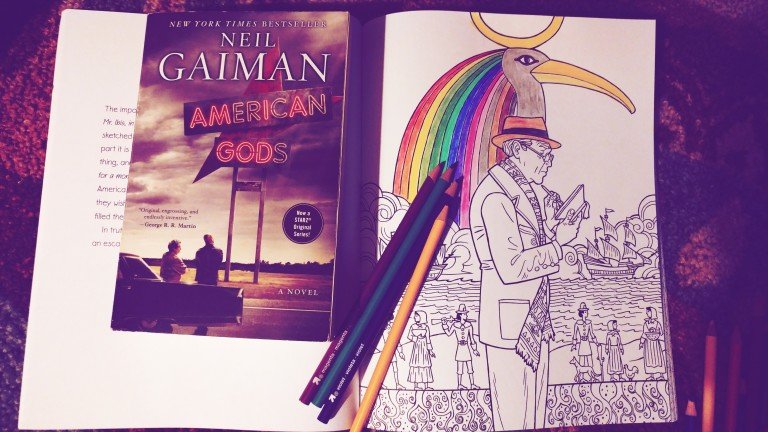 Wow, what a story! First of all, I’d like to thank TLC Book Tours and HarperCollins for the copy of this book in exchange for a fair review.

This was my second experience with Neil Gaiman. However, my first experience wasn’t finished (oops) – my husband and I were listening to Anansi Boys on a car trip, and didn’t end up finishing when we got home. It was such an enthralling story, it kept our attention for hours in the car. So, I thought that this book would do more of the same for me.

American Gods, though, was a hard read for me. It’s undeniably a fantastic, fantasticAL story, written with amazing attention to detail, beautiful turns of phrase and just overall impeccable creativity. If I was more of a fantasy story lover, I know I would have enjoyed this book. I did enjoy parts of it – I definitely got sucked in several times. It’s just so out of my wheelhouse, though, that I had a hard time getting through the whole thing.

In a nutshell, the story is about gods living in America. Yes, we’re talking Odin, Loki, and all the rest. However, these “old” gods are in a strange battle with the “new” gods that Americans worship, such as Media, World, and Time. (If you like to read books in an English major sort of way, enjoying the themes, you’ll love dissecting this one.) Our main character, Shadow, leaves prison to find he gets sucked into a crazy world of gods and battles and craziness.

It’s long. It’s really long. I don’t think I would cut anything out of it, because it all makes sense for the story, but I just had a hard time making it through. Many of the chapters were super long, too – luckily, there are breaks to stop at, but I don’t often stop reading in the middle of a chapter, so I felt compelled to keep going, even when I felt like stopping because my attention was waning.

I also got a little confused about all the characters in this book – there are many of them, and they have some pretty strange names. I had a hard time keeping a lot of them straight. Perhaps it’s just because I don’t usually read fantasy stories with lots of characters and strange names and such, but I had a difficult time with it. A couple of the names, I didn’t bother trying to figure out how to say and just sort of mumbled in my head when I got to them.

All of that said, I would definitely try watching the series that’s on Starz. Unfortunately, I don’t have cable, so I don’t have the means to watch it currently. After reading the book, though, I think the series would be a total trip.

In conclusion, this is a dark fantasy story that, for me, would be best listened to or watched, because it was hard for me to keep my attention on the book. If you’re a fantasy fan, though, have at it – I’m sure you’ll love it.

American Gods is my favorite book! I’m glad you got to enjoy it!