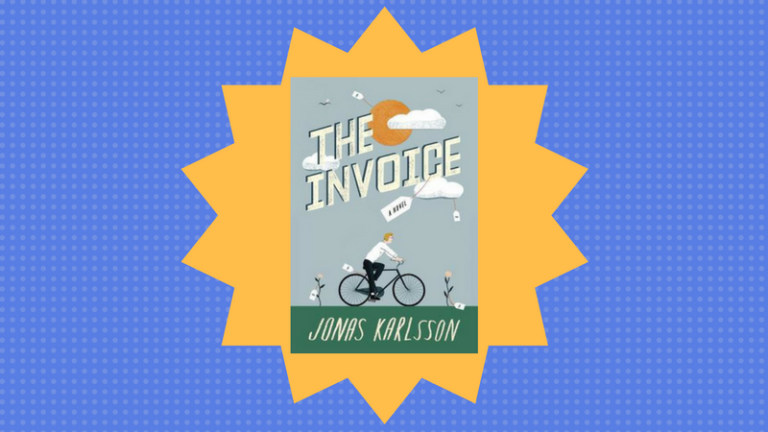 I was so intrigued by this little book when I got it in the mail! It’s not often that a book comes in such a pint-sized binding. I loved the cover and was excited to dive in.

At first, I really wasn’t sure how I felt about this one. It started light and fun, then took an interesting turn that I wasn’t quite sure was my cup of tea. As I read on, though, I really started to change my tune.

The story begins with an ordinary man living an ordinary life. He makes a very modest income working at a movie rental store with all the classics. He’s not married, he doesn’t have a girlfriend, his small apartment is just comfortable without any bells and whistles, he has one friend…but seemingly in spite of such a quiet and mostly solitary sort of life, this man is content and, well, happy.

One day, he gets a ridiculous invoice (bill) from some sort of vague bureaucratic organization. The amount he owes is astronomical, and he has no idea how he could possibly owe that much, or what it could be for. The story that follows is sometimes funny, sometimes sad, often perplexing, insightful, and chock full of human nature.

I loved some of the conversations that happened between the main character and the woman he ends up chatting with at the company to which he owes a ridiculous amount of money. She finally ends up telling him what it is he owes for: a lifetime of happiness. If you’ve had a good life, you’ve got to pay for it. As it turns out, our guy’s average life adds up to a great one. Perhaps even the greatest life lived so far?

The Invoice was a fun, quick read. It was smart and insightful, and I’ll give it a solid 3.5 stars.

fictionI would recommend this book to othersquick read
Share 0 FacebookTwitterPinterestEmail