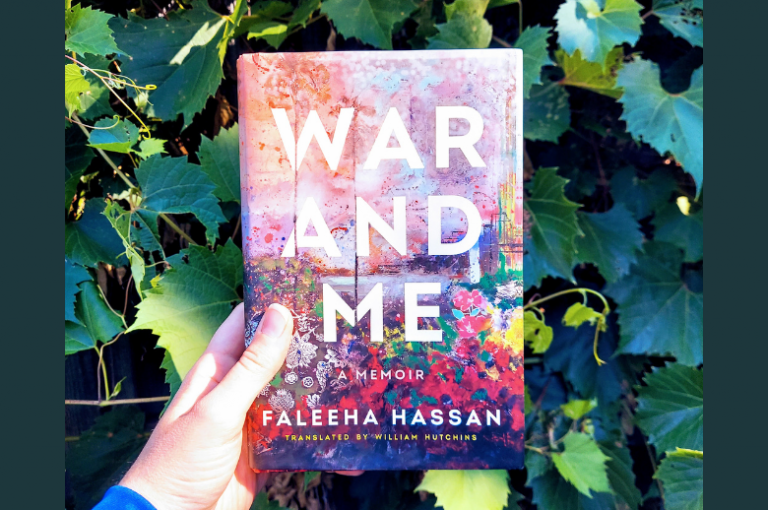 What a book. If you like memoirs (or even if you haven’t in the past but might want to try another one), pick up War and Me. What a harrowing story! Read on for my full review.

An intimate memoir about coming of age in a tight-knit working-class family during Iraq’s seemingly endless series of wars.

Faleeha Hassan became intimately acquainted with loss and fear while growing up in Najaf, Iraq. Now, in a deeply personal account of her life, she remembers those she has loved and lost.

As a young woman, Faleeha hated seeing her father and brother go off to fight, and when she needed to reach them, she broke all the rules by traveling alone to the war’s front lines—just one of many shocking and moving examples of her resilient spirit. Later, after building a life in the US, she realizes that she will coexist with war for most of the years of her life and chooses to focus on education for herself and her children. In a world on fire, she finds courage, compassion, and a voice.

A testament to endurance and a window into unique aspects of life in the Middle East, Faleeha’s memoir offers an intimate perspective on something wars can’t touch—the loving bonds of family.

This story had me just rapt the whole time. I wasn’t prepared for just how harrowing Faleeha’s tale would be!

We start in Faleeha’s childhood, and experience the onset of war with her. It’s just devastating, the toll it took very suddenly on life in her family, her school, and her community. And then? The war goes on, and on, and on, until she’s sure it just won’t ever end. So much happens to her family and her city in that time, and while they find a way to live in a way that’s fulfilling, it’s hard.

Then, when the war is over, the embargo Iraq was put under by the US really made life hard. They didn’t have enough food, there was no money, and life was just hard…again.

I won’t go through the author’s whole life here in this review – you’ll have to pick it up to find out what happens to her! I do have to take a moment to reflect on how beautiful her writing is. Even through translation, she writes with such passion and courage, and it’s so beautiful. It did take a little bit of time to get used to the translation, but then it just started to flow for me. She’s also a poet, which makes sense – you get some of that in the way she writes prose, too.

I think I (and most of my fellow Americans probably) have no idea how the war impacted the people of Iraq. This was such an eye-opening book, and I was just astounded by the author’s bravery both in the way she lives her life and for writing this book with such an intimate look at that life. War and Me will go on my shelf of favorite books I’ve read so far this year.

5 stars for this gem!